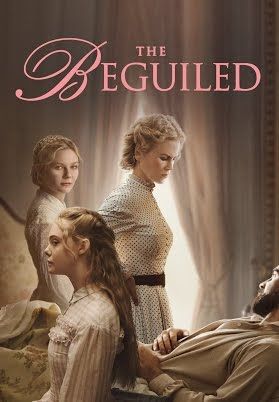 I’ve been a fan of Sophia Coppolla since “Lost in Translation”, as well as “Marie Antoinette” and “The Virgin Suicides”. If you take her and add one of my favorite actresses (Nicole Kidman) and mix it with Civil War-era Southern Gothic, you’ve hooked me.

Kidman plays Miss Martha, who runs a finishing school for girls in the battle-ravaged South. In its heyday before the war, it turned out elegantly poised and intelligent young ladies, but during the war the handful of students (ranging in age from 9-17 or so) seem more like prisoners in their crumbling mansion, and the locked gate acts as an attempt to keep out the horrors that are happening all around them. Often, the sounds of battle can be heard nearby; otherwise, the buzzing cicadas are the only sound, deepening the eerie (and menacing) sense of their isolation.

One day one of the younger girls finds a wounded soldier (Colin Farrell) outside their gates–a Union soldier. Miss Martha decides to bring him inside and tend to his wounds out of Christian charity, with the admonition that once he heals, he must leave.

The younger girls are fluttery and excited at having an “enemy” in their midst. The older ones–17 year old Alicia (Elle Fanning), Edwina (Kirsten Dunst), Miss Martha’s former student and helper, and even Miss Martha herself–are unsettled and disturbed at having a handsome, charming man among them. 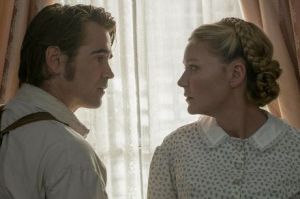 And Corporal John McBurney does charm them–making friends with the young ones, and flirting with the older. He’s certainly come to understand the great fortune of his situation: if he can convince them to let him stay on as a gardener after he heals, he can escape the nightmare that is the war. An understandable motive, but this stranger’s true character remains elusive. Is he truly a good man in a bad situation, or is he merely trying to serve his own ends in whatever way he can?

Soon, the sexual tension comes to a head, and violence erupts. Miss Martha and her charges must deal with their suddenly dangerous guest on their own, with no help from the outside world.

Kidman  never fails to disappoint, bringing the nuances of Miss Martha’s predicament and mixed feelings to light, and Farrell’s smoldering volatility serves his character well. It’s a quiet film in which the tension mounts incrementally; the explosion that follows shocks the characters into actions they perhaps never imagined they could do. This movie beguiled me, from start to finish.