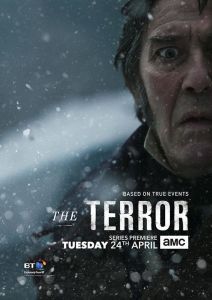 The Terror is AMC’s limited series (10 episodes) based on Dan Simmons’ book, which is a fictionalized account of Captain Sir John Franklin’s lost expedition to the Arctic in search of the Northwest Passage in 1847.

The two naval ships involved are Erebus, captained by Sir John (Ciaran Hinds), and The Terror, led by Captain Francis Crozier (Jared Harris). The two ships become stuck in the ice, trapping them in frigid temperatures and constant darkness in winter. They must contend with illness and the squabbling of men in close quarters; not only that, but it becomes clear that something is out there on the ice, something that hunts them.

Like TNT’s The Alienist, this is a 10 episode limited series, a form I’m beginning to really enjoy–an entire story contained in one season, but longer than a movie, so that some backstory and character-building can be established.

Sir John is perhaps your typical Victorian captain, likable but full of hubris, eager to find glory on his last commission, blind in many ways to the mortal danger the expedition has found itself in. Francis is much more realistic and cautious, constantly warning Sir John and suggesting various plans to find help, but Sir John stubbornly refuses them all. The relationship between these two men is strained, not only professionally, but personally: in flashbacks, we learn that at home, Francis had proposed to Sir John’s niece twice, and her refusals stemmed not only from her concerns about being a sailor’s wife, but by Sir John’s refusal to give consent. The fact that Francis is an Irishman plays heavily in both Sir John’s refusal as well as Francis’ stalling career. It’s clear Francis never wanted to be on this expedition, but is there to “look after” Sir John, and perhaps win his beloved’s approval.

The lone woman (besides Sir John’s wife and niece in the flashbacks) is a native Inuit woman who the men call Lady Silence (Nive Nielson). While out on a mission to send a message to a distant outpost, a contingent of men think they see some sort of creature and shoot. They find that they’ve shot a native man, the woman’s father. Their doctors cannot save the man, and they cannot get any information out of the woman, despite Francis and his first mate able to speak her language; she remains stubbornly silent, hence the name. The surgeon on the Erebus (a surgeon was not considered a “doctor” back then, and was a bit looked down upon by the uppity doctor of the Terror), Mr. Henry Goodsir (Paul Ready) forms a tentative bond with the woman as he tries to solve the mystery of who she is and what she may know about the creature.

Meanwhile, Petty Officer Cornelius Hickey (Adam Nagaitis) is stirring up trouble aboard the ships. He harbors ambition beyond his social status, and attempts to ingratiate himself with his betters; when that doesn’t work, he develops a bitter contempt for authority, and shrewdly manipulates the men around him as conditions worsen and become desperate. Hickey’s story arc will become pivotal towards the conclusion of the series as the main human antagonist. Nagaitis (whose amazing work I’ve encountered in To Walk Invisible: The Bronte Sisters, as Branwell Bronte) manages to infuse the troublesome Hickey with an oily charm; even when he’s being whipped, that slight, condescending smirk never leaves his face.

There are many antagonists the men must face: the cold, fear, starvation and the prospect of cannibalism, illness, madness, personal demons, as well as Hickey’s machinations. The beast itself is almost an afterthought; that is, until he strikes, about every few episodes. I was a bit puzzled about the beast’s very existence–what is he, exactly? Demon, monster, native guardian spirit? I never quite figured it out, but he’s also clearly a symbol of the vicious forces destroying the expedition. A symbol with teeth.

Like the landscape itself, the pace of the story is often glacial, taking its time with character development and building the momentum. Sometimes it felt tedious, but most of the time I didn’t mind, enjoying getting to know these characters, especially Francis, who emerges as the hero of the tale. He nearly succumbs to alcoholism early on, but once he overcomes it, his determination, bravery, integrity and loyalty to the men is outstanding and admirable. His poignant decision at the end of the story was the only one he could make, and a little lump formed in my throat at the sheer sadness of it all.

Part horror, part adventure story, part psychological drama, The Terror is a strange tale, but gripping and impressive, unlike anything I’ve seen on TV in a while.