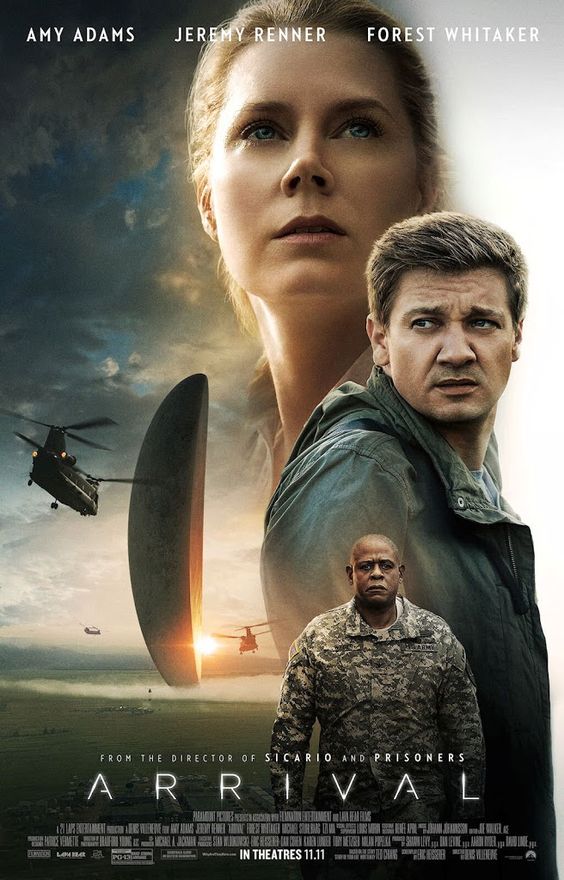 Don’t get me wrong: while I wasn’t much of an ID fan, I did love the Aliens franchise, where the baddie ET’s were blown to bits in thrilling action sequences, and Sigourney Weaver’s bad-ass performance made me pump my fist in the air with a heartfelt “You go, girl!”

Amy Adams’ character, Louise Banks, is a heroine of a different nature. The quiet, unassuming linguistics professor is chosen to help communicate with the aliens who’ve parked their egg-shaped ships in twelve different locations across the globe. Louise is swept away to Montana, the location of the American alien ship, to work with the military, as well as with scientist Ian Donnelly (Jeremy Renner). Forest Whittaker is the no-nonsense Colonel Weber, who’s running the show. The directive from his superiors: find out what they want.

Louise and Ian are suited up and brought to the ship to meet the aliens, who look like a cross between squid and branch-like walking fingers. Their language sounds like whale song, and Louise knows that a written or visual language would be more appropriate to communicate with them. In a breakthrough, they witness the aliens secrete an inky substance from one of their tentacles which forms a lovely circular symbol that acts as writing. Building on this, they spend a few months accruing a vocabulary that lets them talk with the creatures on a basic level.

Unfortunately, the world isn’t patient enough to let this important work continue; global tensions are rising, people are getting nervous, and China and Russia are getting antagonistic toward their alien visitors, threatening to attack them. Weber urges Louise to ask them the vital question: what is your purpose on earth?

This is where the film takes a twisty, philosophical turn, even as the tension rises. There’s a wondrous, heartbreaking secret at the core of this movie, one which I won’t reveal here, of course. It’s all a bit mind-blowing and has to do with a personal experience of Louise’s that encompasses both joy and grief, and ties in with the aliens’ perception of time, which is circular (like their visual language) rather than our linear experience of it.

I know, I know–huh? But believe me, it works, and the final act unfolds in a beautiful sequence that is moving and impressive. This is a film about the nature of time and how we communicate; it’s also about choosing love in the face of grief, joy over fear. This is my kind of science fiction, encompassing the human heart as well as spanning the literal universe.