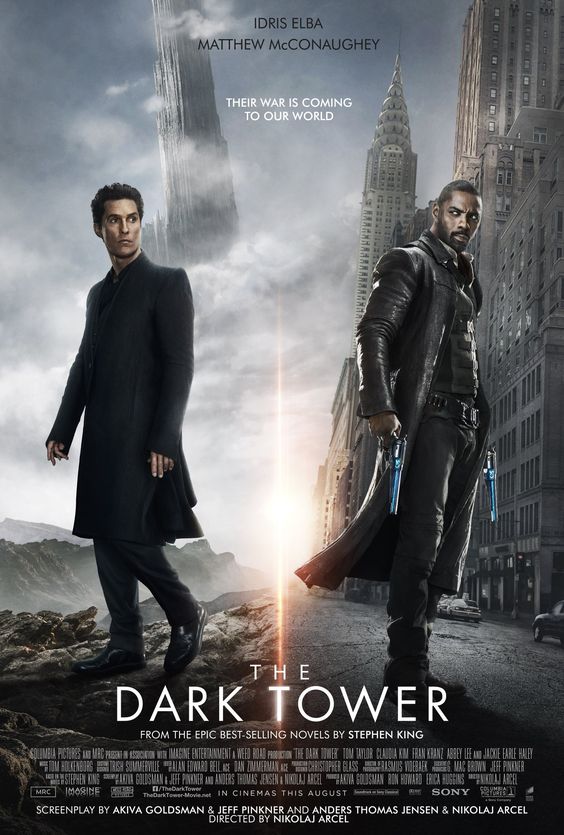 Over the past year or so, I’ve been reading Stephen King’s epic Dark Tower series. There are eight books in all, and I’m about in the middle of the fifth book, Wolves of the Calla.

I’ve been quite eager to see the movie version that came out last August. I was under the impression that it was based on the first book, The Gunslinger.  The film does center on the relationship between the last Gunslinger, Roland Deschain (Idris Elba) and young Jake Chambers (Tom Taylor), as he pursues the Man in Black (Matthew McConaughey) in order to protect the Dark Tower (a structure that holds the universe together). That’s the basic premise of both the film and the book.

The problem, as I see it, is that the filmmakers tried to pull various threads from all of the books and weave them into something coherent in a not-quite two hour movie, as well as adding in things that never happened in the books. The result is a jumbled mess that I suspect would barely make sense to anyone who hasn’t read the books. Or rather, because I have read some of the books, it seems like a hurried scramble of elements that could have been handled better; maybe the average movie-goer who hasn’t read the series would have no problem with accepting the plot. Maybe.

Either way, the film follows Jake, a 13 year old from New York City, who’s been having nightmares. Specifically, about a Dark Tower in another world that is of immense importance, a Tower which is under attack. Children are being abducted, children who have a special power called the Shine (some level of psychic power), and are used to send destructive beams toward the Tower. The person orchestrating all this is the sorcerer Walter, aka The Man in Black. He wants the Tower destroyed so that the universe will collapse, letting in chaos and darkness. Jake also dreams of the last Gunslinger, a man who opposes Walter and means to end his life.

Jake manages to find a “portal” or door to Roland’s world (there are many such portals between the worlds), and finds Roland. To his dismay, he realizes that Roland only wants vengeance against Walter, who had killed his father and everyone else he has ever loved. He has no interest in saving the Tower; basically, he’s given up that particular quest. Walter soon learns that Jake has the most “pure” shine ever discovered in a child, and wants him for his mechanism that sends destructive beams toward the Tower. He wants to end it once and for all. The film lurches toward that inevitable meeting between Gunslinger and Man in Black, with Jake in the middle, along with the fate of the universe.

I have to say that casting McConaughey as Walter was brilliant; the man clearly enjoyed playing the flippant, purely evil Man in Black. Not quite the Devil himself, but a very effective agent of evil, one that’s gotten a little bored with eternity and likes to play around with his victims. Though Stephen King has said that his character Roland was based on Clint Eastwood in his spaghetti western films, Elba was a refreshing choice for the stoic, spiritually spent Gunslinger; Taylor did fine as the suffering, idealistic kid who brings Roland around to do the right thing.

Still, the great performances couldn’t save this film for me. The biggest problem was the Tower itself: yes, it holds the universe together, but how, and why? What’s in the Tower? These questions were not answered. It remained an inanimate object that failed to engage our emotions. With the fate of the universe at stake, it has to be more than just a sliver of rock in the middle of nowhere.

As a reader of the books, I caught references to things that held great meaning in the novels: the number 19, the roses at the base of the Tower, the wrecked amusement park, the thirteen orbs, and many other little things that held significance. None of which were explored or explained in the film, which I found frustrating. I get it; there’s no time in a film. So why bother putting them in at all? It’s just a tease to a fan of the books, and makes no sense to anyone else. I feel this story would have been much better served as a mini-series, where the nuances and details of this great epic could be explored more satisfactorily. Very disappointing, to say the least.